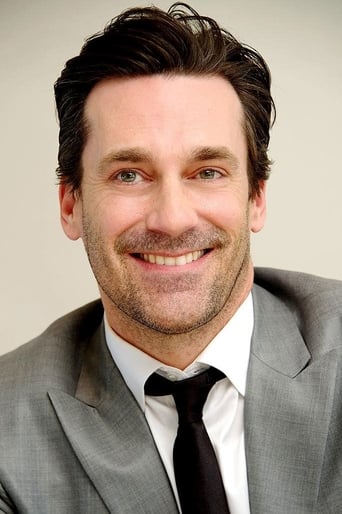 Jonathan Daniel "Jon" Hamm (born March 10, 1971) is an American actor who works primarily in television. For much of the mid-1990s, Hamm lived in Los Angeles as a struggling actor appearing in small parts in multiple television series, including Providence, The Division, What About Brian and Related. In 2000 he made his feature film debut in Clint Eastwood's space adventure, Space Cowboys. The following year, Hamm appeared in the independent comedy, Kissing Jessica Stein (2001) in a minor role. Hamm gained global recognition for playing advertising executive Don Draper in the AMC drama series Mad Men, which premiered in July 2007. Hamm's performance earned him a Golden Globe Award for Best Actor in a Drama Series in 2008. Aside from his work on Mad Men, Hamm appeared in the 2008 science fiction remake, The Day the Earth Stood Still and claimed his first leading film role in the independent thriller Stolen (2010). Hamm had a supporting role in the 2010 crime film The Town. Description above from the Wikipedia article Jon Hamm, licensed under CC-BY-SA, full list of contributors on Wikipedia.