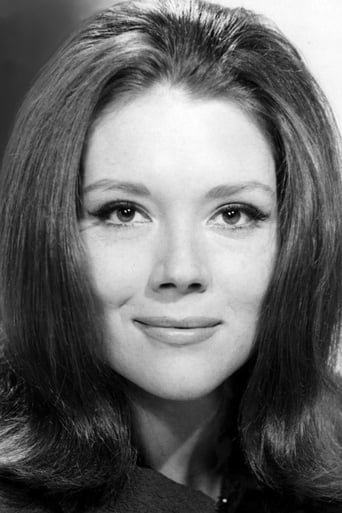 She is more properly known as Dame Diana Rigg, the female equivalent of the title "Sir" when knighted. In June 1994, she was made a Dame Commander of the Order of the British Empire (DBE) by Queen Elizabeth II for her long contributions to theater and film. Earned Tony nominations as Best Actress (Dramatic) for "Abelard and Heloise" (1972) and for "The Misanthrope" (1975). She won the Best Actress (Play) Tony Award in 1994 for her performance in the title role of "Medea." In recent years, her performances in "Who's Afraid of Virginia Woolf?" and "Mother Courage and Her Children" have led critics to proclaim her one of the greatest actresses on the British stage. A savage review from John Simon for her performance in "Abelard and Heloise" led her to collect devastating theatrical reviews throughout history. The result was her book "No Turn Unstoned," published in 1982. Rigg is Chancellor of Stirling University in Scotland. Was recently voted the sexiest-ever TV star by TV Guide in the USA. Mother of Rachael Stirling (born 1977). Measurements: 34-25-36 1/2 (Source: Celebrity Sleuth magazine). 20 October 2003 - British courts awarded her $63,832 and $134,000 in court expenses in her libel suit against Britain's "Evening Standard" and "Daily Mail" newspapers. They had written that she was an embittered woman who held British men in low regard. She was nominated for a Laurence Olivier Theatre Award in 1999 (1998 season) for Best Actress for her performances in both "Britannicus" and "Phèdre.". She was nominated for 1997 Laurence Olivier Theatre Award for Best Actress in a Play of 1996 for her performance in "Who's Afraid of Virginia Woolf?". She was awarded the 1992 London Evening Standard Theatre Award for Best Actress for her performance in "Medea.". She was awarded the 1996 London Evening Standard Theatre Award for Best Actress for her performances in "Who's Afraid of Virginia Woolf?" and "Mother Courage.". Born in Yorkshire, the daughter of a railroad engineer, she moved with her family to India at the age of two months and lived there until she was 8. (She learned to speak Hindi.). The first major actor (along with co-star Keith Michell) to appear nude on stage in the production of "Abelard and Heloise" in 1970. Became an Associate Artist of the Royal Shakespeare Company in 1967 and was the first as such to join the National Theatre of Great Britain (1971). Received honorary degrees from Stirling University in 1988 and Leeds University in 1992. Became a Member of the RADA Council. Graduated from RADA. Was forced to turn down the role of Elizabeth in Paint Your Wagon (1969) with Clint Eastwood, due to illness. Jean Seberg replaced her. Father: Louis Rigg. Mother: Beryl Helliwell. Her ex-husband, Archibald Stirling, is the nephew of Colonel Sir David Stirling, founder of the Special Air Service (SAS).