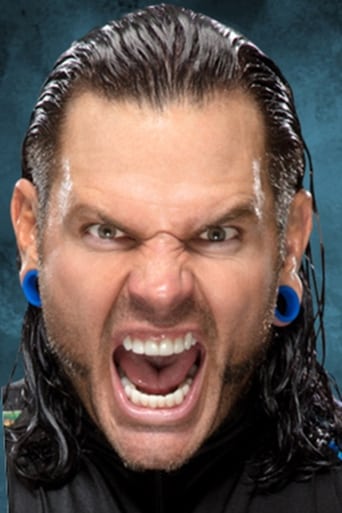 is an American professional wrestler, singer-songwriter, painter, and musician. He is currently signed to WWE, where he performs on the SmackDown brand, and he is one half of the SmackDown Tag Team Champions with his brother Matt Hardy. Hardy is best known for his work in the World Wrestling Entertainment. He also worked for Total Nonstop Action Wrestling (TNA), Ring of Honor (ROH) and several companies on the independent circuit. Before gaining prominence in the WWE, Jeff along with his real life brother Matt, ran and performed for the Organization of Modern Extreme Grappling Arts (OMEGA). The Hardy brothers worked as enhancement talents for the WWF from 1994, and were signed to full-time contracts in 1998. They gained notoriety in the tag team division, partly due to their participation in Tables, Ladders and Chairs matches. With the addition of Lita, the team became known as "Team Xtreme" and continued to rise in popularity. Alongside Matt, Jeff has held twelve world tag team championships between WWE, TNA and ROH. Hardy has had success as a singles wrestler, capturing his first of six world championships, the WWE Championship, in 2008 and going on to hold WWE's World Heavyweight Championship twice and the TNA World Heavyweight Championship three times. He has also won the Intercontinental Championship four times, the Hardcore Championship three times and the European Championship, Light Heavyweight Championship and United States Championship once each. He is the 18th Triple Crown Champion and 9th Grand Slam Champion in WWE history (one of five men to complete both WWE Grand Slam formats, and one of two to win all original Grand Slam titles). Hardy is involved in motocross, music, painting and other artistic endeavors. He is currently a member of the band PeroxWhy?Gen, with whom he has released three studio albums and three extended plays. On September 17, 2008, Hardy was involved in an incident at the Nashville International Airport's Southwest gate.A Southwest Airline employee reported that Hardy appeared to be intoxicated, and therefore, he was not allowed to board the flight. He was not, however, arrested as he was said to be "calm" and "co-operative", and he made other arrangements to get home. On September 11, 2009, Hardy was arrested on charges of trafficking in controlled prescription pills and possession of anabolic steroids, after a search of his house yielded 262 Vicodin prescription pills, 180 Soma prescription pills, 555 milliliters of anabolic steroids, a residual amount of powder cocaine, and drug paraphernalia.[307] Over a year later, the district attorney announced that Hardy would plead guilty to the charges.[308] On September 8, 2011, Hardy was sentenced to ten days in jail, 30 months of probation, and a fine of $100,000.[309][310] Hardy served his jail sentence from October 3 to 13, 2011. Hardy was again arrested March 10, 2018, for driving while impaired following a traffic accident in Concord, North Carolina